The date label on the baby said 12/07/2017, 10.48 am. She had been born just a few minutes before and weighed 3,6 kilograms. We had wrapped her in a kanga that her mother had brought with her to the hospital before labour. Women coming to give birth have to bring everything with them – kangas, cotton, medicine, syringes – even gloves. For the delivery they are not given any kind of pain medication, partly to assure that they would notice if something is wrong, and partly because there is simply none. This baby girl was luckily born healthy without any complications and went home with her mother few hours later.

In a day the amount of deliveries in the maternal ward at Amana hospital, Dar es Salaam, can reach up to 60 or even more. Maternal ward contains eight beds which are often fully occupied. Privacy is a problem; women give birth while people keep running back and forth beside them. The overworked hospital staff does their best despite the lack of all the equipment imaginable. During the afternoon lidocain (a local anaesthetic) runs out and after that the stitching is done without anagelsia. Despite the challenging conditions, the most genuine thanks I’ve ever gotten was from the newly mother in Tanzania after assisting her labour. African women are probably the strongest people I’ve ever met.

In total we were five foreign students at the Amana during July. We got to choose the departments by ourselves and I spent most of the time at the labour ward and in obstetrics which are probably the most hectic departments at the hospital due to the high birth rate. I also did a few shifts at traumatology and general surgery. The Tanzanian doctors and nurses were very keen on teaching and I was able to participate quite a lot since the working language there is English. I gained a lot of practical experience and even though the way of doing things differs quite a lot from that of western countries, I got many valuable teachings in encountering people, in the context of a hospital and in life in general.

Tanzania is a beautiful African country with so much to see that you could easily spend months just exploring. As it is probably the safest country in Africa, it’s an easy one to begin with. During the month I swam in Zanzibar, trekked in Morogoro and visited Moshi, just to name a few. Still there remains a lot to be seen. Medically I witnessed the craziest, saddest but also the most beautiful things of my short ”career” (three years of medical studies) at the Amana during my one month internship. The resources of the hospital are poor in so many ways and the staff and the patients have no other option but to cope with it.

In the daily life, outside of the hospital, I was somehow quite unlucky. I got robbed, my luggage got lost, my apartment flooded and at the end of the month I realized I had had a roof rat as a roomie for couple of weeks. Apparently they sleep during the day and wake up in the night. I wasn’t very happy to learn that… Despite these unfortunate happenings I had a great month. Thanks to the support of good friends, even the rat couldn’t ruin the experience for me. Besides, now I have many good stories to tell.

My ”first Africa” taught me once again to appreciate the privileged conditions we are born in in western countries. They shouldn’t be taken for granted. 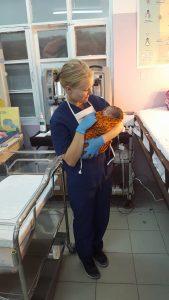 [Lotta Kemppinen is a third year medical student at the University of Turku in Finland. She participated in a medical internship organized by the PeerCorps Trust Fund in Tanzania].